Tyrosine - Amino acid that provides the basis for mood-regulating neurotransmitters*

Palmitoylethanolamide (PEA) is a biologically active, endogenous lipid that is widely distributed throughout the body's tissues and is synthesized on demand. (Gabrielsson 2016) It was first isolated in 1957 as an anti-inflammatory component in egg yolks and is found in many foods. PEA has been studied extensively for its anti-inflammatory, neuroprotective and analgesic properties since the 1970's.* (Hesselink 2013)PEA plays a key role in maintaining homeostasis by regulating many physiological reactions associated with pain and inflammation. Some chronic conditions can deplete PEA, resulting in a hyper-immune response involving glial, microglial and mast cells. Excessive activation of these satellite, non-neuronal cells has been shown to maintain inflammation and result in neurodegeneration. PEA reduces excessive activation of these cells and decreases neuron loss.* (Raso 2014)

In a recent meta-analysis of PEA involving a total of 1484 chronic pain patients, those taking PEA reported pain levels an average of 2.7 points lower than the control groups after 60 days.* (Paladini 2016) 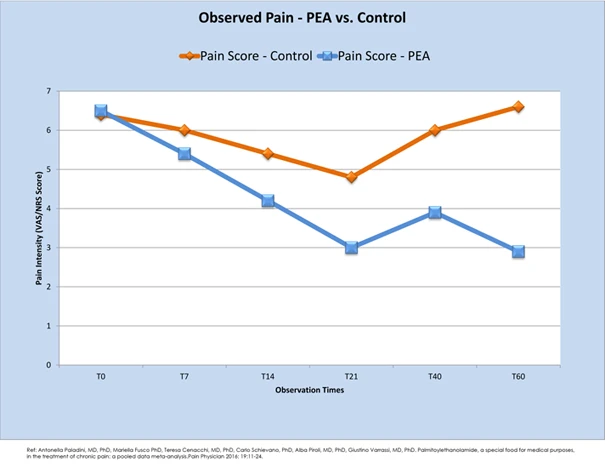 Luteolin is a potent bioflavonoid with antioxidant and anti-inflammatory properties. Like PEA, luteolin has several mechanisms of action. It inhibits mast cells, as well as mast cell-dependent T cell activation.* (Theoharides 2018) In addition, it modulates microglial activation and inhibits pro-inflammatory cytokine production. (Dirscherl 2010) It also acts on GABA and opioid receptors in the spinal cord.* (Li 2015)

The Synergistic Combination of PEA & Luteolin

Mirica® is made in a cGMP registered, FDA registered facility in the USA and tested by an independent lab.